Arr, me mateys, how went yer Halloween? If’n you not be reading me blog in time,

mayhaps you got yerself scared by a creature using me spine-chilling Halloween tips. Well, don’t be feeling like a stupid idiot. Remember, even a big bad witch name of Baba Yaga shivers her timbers under her covers at night when she thinks about some swabby asking her questions.

And even me big bold pirate captain dad had him the vermiphobia. Any time he spied

him a worm he be stomping it into the ground with his size 19 boots. “Worms be EVIL, Baba girl,” he sez. “Just ask Captain Blue Tooth Jaggli. No, avast kiddo, you not be asking him nothing.  Aye, aye, he be resting in Davy Jones’ locker.” That means he be deader than dead.

Captain Jaggli had him a handsome pirate ship called the Swiss Raider. One day on the

way to an epic raid he spotted 15 worms dancing a hornpipe on the deck. He be in a hurry so he lets them stay. That be one huge mistake. They not be yer cute wiggly garden worms. They be hungry ship-eating wood worms.

The ship she sailed away from the raid full of loot. She also be so full of worm holes that Blue Tooth should ought to have renamed her the Swiss Cheese. That ship she sank lower and lower and lower until all that be left of her be a few ripples on the water. Then, nothing. 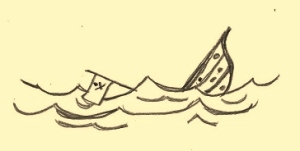 Rats and slugs, I be extra thankful me flying soup bowl it not be made of wood. I doesn’t have to have me the vermiphobia. Son of a sea dog, what if we all sat us down and had us a think about the things we not be afraid of? It might could become a thing.

Son of a son of a sea dog, but that be heavy stuff. I be ready for me blue rose tea and a grilled cheese sandwich while I works on a holiday greeting for you, me mateys.

This site uses Akismet to reduce spam. Learn how your comment data is processed.

Arr me mateys, these be tryin’ times fer sure. All you out there keep clam and solder on. And take care of each other. That be no bilge neither.